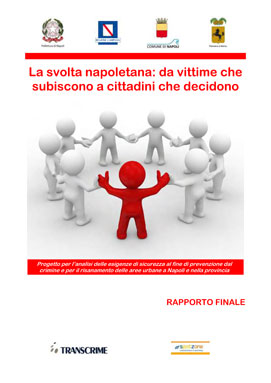 The Neapolitan Turning Point: From Suffering Victims to Citizens who Decide

The report sets out the results of a pilot survey conducted in two urban areas of Naples to evaluate and map crime phenomena, urban disorder and insecurity. This study proposes a new methodology with which to map security in urban districts by involving the collaboration of their residents. The trial project confirms the results of other international studies reporting that crime phenomena, urban blight and insecurity do not occur at random across a territory but concentrate in ‘hot spots’ against which action can be taken with measures involving not only law enforcement but also, and especially, urban renewal.
The report, carried out by Transcrime and funded by Spotzone Srl, has been supported by the Prefecture of Naples together with the Campania Region the City and Province of Naples.