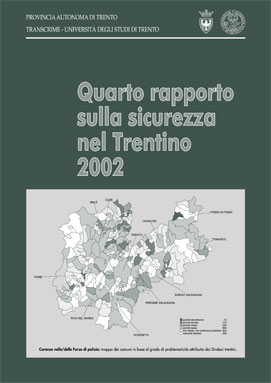 The Integrated Security System in Trentino: A Construction Yard

Like previous years the presentation of the annual report is the opportunity to open a discussion on future initiatives. These regard the changes which are occurring in our work and within the Transcrime family that carries it out. Indeed this fourth report on security in Trentino closes one period and opens a new one. In 1999 we presented the first report on security in Trentino saying that the Province of Trento could create a security “Laboratory”. After four years of work, during which we have researched the problems of security, we are now ready to contribute towards designing interventions. The research and development process that has characterised the partnership between the Autonomous Province of Trento and Transcrime in the security sector has now evolved and passed from “Laboratory” to “Construction yard”. In fact, recently in Trentino a project for the construction of an integrated security system has begun. Step by step, this should lead to the design of a series of integrated structures which should systematically reveal the security needs of each municipality in Trentino, indicate possible solutions and take the necessary steps to see them implemented. This system, where research, through the annual report, and the development of interventions will continue in parallel, will make the relationship between the Province of Trento and Transcrime even closer. During this period we are looking at existing structures to get to know their conditions and the limits to the feasibility of the project. The construction of this “integrated security system” should begin next year.

The passage from “Laboratory” to “Construction yard” has been sustained by a consideration that has gone hand in hand with the growth of the culture of security in Italy and with the various laws, that at a local level, are gradually being produced and applied. The elements of this consideration are four: the first is that the greater our ignorance is of the factors that produce a security problem, the more the partition of the security problem tends to grow; the second is that for the security problem to be dealt with in a rational manner, there is a requirement for constant monitoring of the problems through an information system at the level of each individual municipality (today data is only surveyed at a provincial level); the third is that solutions must be identified and applied by including and integrating all the actors present on the security market today, that is, public, private and the service industry; the fourth is that each proposed intervention must be carefully evaluated in order to cancel or correct the solutions that do not work and to identify those that are more effective and less expensive.

We have invited all those who, at a local level, have been working on the design and creation of a security system for some time. This conference intends to analyse these organisational and operative models so that we can draw suggestions and indications to improve the “integrated security system” project of the Province of Trento.