HomepageResearchPublicationsFifth Report on Security in Trentino 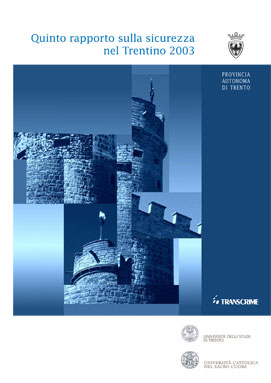 Fifth Report on Security in Trentino

This Fifth Report on Urban Security in Trentino has been renewed both in its content and in its typographical format. These new features reflect two changes: Transcrime transformation into a Joint research centre with the Università Cattolica del Sacro Cuore and the development of the collaboration between Transcrime and the Autonomous Province of Trento, concretised by the creation of an Integrated Security System.

The Report deals with formal social control. The First Part offers a snapshot of criminality throughout the municipalities of Trentino. It continues the monitoring of the situation that was started in previous years, but with an important new detail: the disaggregation of data at the municipality level, with regards crimes for which a criminal proceeding was started. This monitoring is accompanied by an initial discussion on the data on Trentino included in the recent Istat victimization survey, and by a comparison of such data with that regarding the situation of other Italian regions. The Second and the Third Parts regard the institutions dealing with formal social control, i.e. a reflection on two continuously-changing realities, which are both important for building security in Trentino: the municipal police and the justice system. In particular, the municipal police constitutes an area whose regulation at national level needs to be clarified, in order to allow future discussion of its tasks and competences.

The conclusion of this analysis did not satisfy us. It is necessary to go beyond data on criminality and also analyse the social and environmental disorder that characterises some areas of Trentino. Why?

The answer lies in the results of some criminological research, which maintains that urban disorder, both social and environmental (i.e. vandalism, dirt, drunkenness, prostitution and drug dealing) may constitute either the entrance door or the track on which criminal phenomena occur. Simply put, this research concludes that these criminal phenomena can be fought by raising the level of informal social control, i.e. the self regulation capacity of a social context.

This explains the choice of the topic that characterised the conference in which the Report: “Building Security in the Municipalities of Trentino through the Development of Social Control Networks” was presented. This also anticipates next year’s work. It is on this issue that we would like to base the discussion on security, which we will undertake with the mayors of Trentino. To the mayors we will explain how we will compile the “security profiles” of each country. We would also like to talk with them about the institutions dealing with formal social control, such as the municipal police, and about urban disorder and the answers to it that may be found in informal social control.