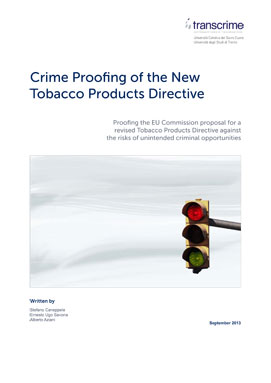 This study concerns the crime proofing of the Proposal for the Revision of the Tobacco Products Directive presented in December 2012, and it is an update of a study on the crime proofing of the policy options under consideration of the revision of Directive 2001/37/EC.
The crime proofing of legislation is a scientific approach developed by Transcrime in 2006 (Savona, 2006a; Savona, 2006b; Savona, Calderoni et al., 2006; Savona, Maggioni, et al., 2006; Morgan and Clarke, 2006; Albrecht and Kilchling, 2002). The core idea is that legislation may produce unintended opportunities for crime, thereby having potential criminogenic effects. When these opportunities and where they may occur is known, the legislation may be “proofed” against crime.
This study is concerned with the impact of the new Tobacco Products Directive (TPD) on crime, and all the more so on the Illicit Trade in Tobacco Products (henceforth ITTP), an area that has not been considered by any of the impact assessment studies carried out by the EU Commission in preparation of the new Directive. Consequently, no knowledge is officially available on the impact of the new regulation upon the ITTP. This report aims at filling this gap by using the available data and making estimates.
In January 2012, Transcrime presented a study which proofed the policy options under consideration for the revision of EU Directive 2001/37/EC against the risks of unintended criminal opportunities for the illicit trade in tobacco products (Calderoni, Savona, & Solmi, 2012).

The study highlighted that “DG SANCO paid almost no attention to the impact on the ITTP” and that “certain measures considered for the revision of the TPD may have serious consequences” regarding possible risks of increased ITTP (Calderoni et al. 2012, p.42).

The impact assessment (IA) released on December 2012 denies the risks of the ITTP. The EU Commission declared “that the preferred policy options do not – in the assessment of the Commission – lead to increased illicit trade” (European Commission, 2012a, p. 6).

More than being the result of an IA of the policy options and their trade-off on ITTP, this statement is an a priori assumption that excludes the area of crime from the IA carried out by the EU Commission. This is a serious flaw that may compromise the validity of the results of the impact assessment itself, and which does not comply with the EU’s official impact assessment guidelines (European Commission, 2009).