HomepageResearchPublicationsThe crime against businesses in Europe: A pilot survey 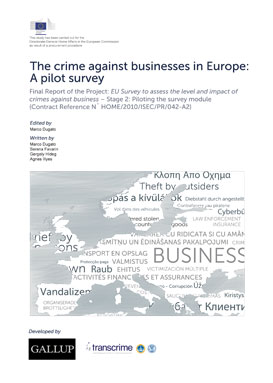 The crime against businesses in Europe: A pilot survey

The project “EU Survey to assess the level and impact of crimes against business – Stage 2: Piloting the survey module” aims at carrying out a pilot survey on the victimisation of businesses across twenty selected European countries.
The main objectives of this project are:
• Implementing a business victimisation pilot survey in unexplored countries of the EU
• Developing a common methodology
• Collecting comparable data
• Analysing data in order to produce comparable results
• Reporting the results in order to produce policy implications
The pilot survey method implements a phased multi-mode approach, first of all by conducting a representative interviewer-facilitated telephone survey (PHASE I) and secondly by redirecting these enterprises to fill in the rest of the questionnaire in a dedicated CAWI interface (PHASE II).
The statistical unit was the local unit or the branch of the enterprises, and the entire universe of the survey was defined as companies having at least one employee, with market or for-profit activities and with available telephone numbers in the sampling frames used.
The pilot survey was implemented in 20 selected Member States of the European Union and each country sample had a minimum of 500 interviews and a maximum of 2,000 interviews, depending on the number of active enterprises in the given country. The survey was conducted on the field between 23rd of May and 3rd of September 2012.
The questionnaire was composed of a preliminary general part on the characteristics of the firms, a screener part aimed at investigating which businesses were actually victimised and which ones were not, and a main questionnaire including more detailed questions for the businesses that were actually victimised.
This first draft of the questionnaire was discussed with the Steering Group of the European Commission first, and then redrafted according to the reviews made by the member of a Technical and Scientific Committee (T&S Committee) formed by a panel of experts in the field of victimisation surveys and crime and criminal justice statistics. The experts provided support in finalising the questionnaire content and tested the formulation and comprehension of the questions before the questionnaire was translated in twenty-two languages.
The initial samples in Phase I were stratified samples of businesses, using disproportional allocation, to ensure over-representation of the larger enterprise segments. Criteria for stratification were the economic activity sector of the enterprise and the company size in terms of persons employed.
As a result of non-response and disproportional random sampling procedures, the distribution of the achieved sample according to key variables was biased. In order to reach unbiased estimations, weights needed to be applied.
For the CAWI subsamples data file, 19 weights were computed that reproduced the composition of the screener sample segments affected by crime in general and specific crimes in particular (one weight for each of the 18 types of crime).
19,039 businesses completed Phase I – CATI interview. 7,839 businesses were victimised in the last twelve months, whereas 11,200 were not. Of the 7,839 victimised ones, 2,815 completed also the Phase II – CAWI questionnaire.