HomepageResearchPublicationsSeventh Report on Security in Trentino 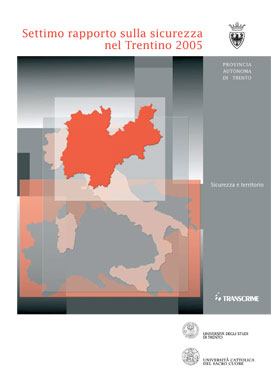 Seventh Report on Security in Trentino

Legality, security and solidarity in the local government among theoretical consideration and political action

The Seventh Report on Security in Trentino analyses in detail the crime data in Trentino in comparison to northern Italy. The territory, from Piemonte to Friuli, including Emilia Romagna, is the subject of this report. For the first time in Italy, crime data are presented according to “security districts”, an analysis which is similar to other aggregation forms, like social and sanitary groups.
The report then deals with victims and, continuing the work in other security reports, discusses local policies for security. The report has been published at a particular moment, in which the events which occurred in Bologna and more recently in France make us reflect on how the processes of social inclusion are still incomplete, both as regards the urban suburbs and their dwellers, and the social suburbs with uncompleted citizenship of the second and the third generation of immigrant children.
These exclusions start from the territory and from the urban suburbs, where all forms of marginality are concentrated, and they demand a new inflection of three basic concepts of the civil social life: legality, security and solidarity.

What is the synthesis among these three variables? How can more legality, more security and more solidarity be achieved in times of few resources?

It is important to consider these three concepts again, by giving the necessary political responses. In times of decreasing expectations for affluence in general there is a risk of decreasing expectations for urban security. The necessary reaction is to reflect on problems, to discuss things again in which we have believed till now, and to express these reflections in integrated security policies. The meaning of integration is found here, in the connection
between respect of legality through crime and disorder prevention, the production of security through the development of mechanisms of informal control and collective efficacy, those of solidarity, like social policies which aim for integration of immigrants, victim assistance, reduction of old and new slavery. There is a need for new conceptual paradigms, wider problematic horizons and new policies. In a global society the problems of Bologna and the events in Paris are symptoms of a more general disquiet, that we all have to face.