HomepageResearchPublicationsSecond Report on Security in Trentino 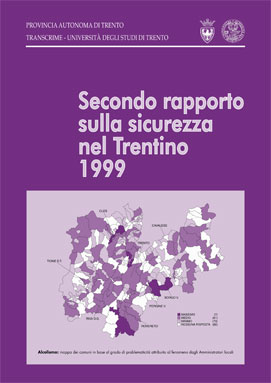 Second Report on Security in Trentino

The role of the state, market and local autonomy in the security of citizens

The second Security Report on Trentino closes at a challenging time with a debate on “Security”. The national legislative package on security is loaded with games of swings and roundabouts. Here criminal events carry the game forward, (a crime causes a reaction – a step forward) and political incidents stop the game, (an election = a pause). Provincial draft law, No. 57 of 2.11.99, “Provincial Policies on Security”, might be the foundation on which the “laboratory on Security”, that was held to be viable last year on the occasion of the presentation of the first Security Report on Trentino, can be built. Both, the law and the laboratory, are needed and the novelty of the Trentino draft law is that it makes it possible to integrate the forth-coming national security reforms into the local dimension. The message is that of fusing repression with prevention, by developing a united and integrated system where the central apparatus can communicate with the local administration and the different private and public situations.

Three key words criss-cross this Conference with significant importance, in reciprocal combination and with reference to the security theme, the exchange between the state and the local autonomies means that the central control structures and local penal authorities meet.

Several good things might ensue from this Conference, for example, more effective central authorities and more efficient handling of security problems by the local authorities. In the same way, the relationship between the state and the market means that either the resources allocated to preventing and controlling crime or to the welfare needed to facilitate social integration and, therefore, reduction of misdemeanours are debated. We would like to begin by reflecting on these issues starting with the Second Report on Security in Trentino.