HomepageResearchPublicationsFlows and Routes: The Trafficking of Women from the East of Europe to the Veneto Region 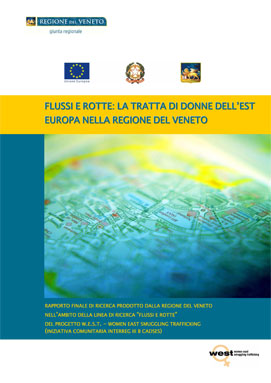 Flows and Routes: The Trafficking of Women from the East of Europe to the Veneto Region

This report represents the contribution that the Veneto Region, together with the Documentation Centre of the Regional Observatory on Urban Security, has brought to the project WEST – Women East Smuggling Trafficking, which was coordinated by the Region of Emilia-Romagna as part of the EU Community Initiative Programme for transnational cooperation in spatial development INTERREG IIIB CADSES (Central Adriatic Danubian South- Eastern European Space).

The overall aim of this research was to outline a map of the main streams that characterize the trafficking in women with the purpose of sexual exploitation, when the victims are Eastern European women bound for the prostitution market in the Veneto Region.