HomepageResearchPublicationsFirst Report on Security in Trentino 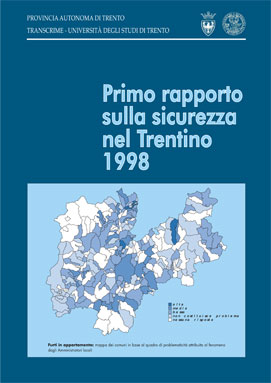 First Report on Security in Trentino

Security, for most people everywhere, is one of the major problems, and ranks high on the list of national priorities. The inevitable politicising of the issue often leads to the elaboration of “prêt à-porter” (off the peg) solutions that put the one who proposes them, individual or party, in the spotlight, but hardly ever lead to any real changes in the problem. However, the security problem could be seriously dealt with and partially solved if investments were made in investigating and courageously experimenting new solutions that have been successful elsewhere.

The low crime rate in Trentino makes it possible to hope that new solutions to combat adult and juvenile crime could be experimented with so as to give the citizens that feeling of well being that only a perception of security can provide. This is the essence of the theme of this Conference, “Trentino, Security Laboratory”, where the presentation of the first Security Report is an opportunity to reflect on the “Security” problems and debate possible solutions. The context is encouraging, central and local institutions are collaborating with the Security and Judicial Authorities. This is reinforced by the Protocol of intent signed on 12.11.93 between the Autonomous Region of Trento and the Ministry of Justice.

This Conference is also an opportunity to expand the debate to the work already done and the future programs of this sub-committee.