HomepageResearchPublicationsEighth Report on Security in Trentino | Trends no.1 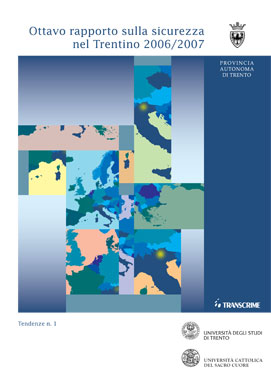 Eighth Report on Security in Trentino | Trends no.1

Produced for:
Autonomous Province of Trento

The report evaluates crime trends and is the latest in the series of Security Reports which for eight years have monitored security trends in Trentino and in Italy, and this year in Europe as well.

Why is this ‘triangulation’ among Europe, Italy and Trentino proposed for examination by practitioners and researchers.

The fundamentals of security today reside in a plurality of increasingly less local and increasingly more international factors. What happens in Trentino is relevant to the rest of Italy and Europe, and vice versa. Transnational comparison is thus of ever greater importance.

The report analyses offences against the person and against property, examines trends from 1995 to 2005, and conducts spatial comparison of the data for the period 2004-2005.

Apparent from the analysis is the phenomenon of ‘muted’ violence: homicides decrease everywhere, unlike violent offences. Violence appears to express itself increasingly less in homicides and increasingly more in a wide variety of behaviours, rather like a river in full spate which, on encountering obstacles, divides into numerous rivulets.

This is a signal whose understanding requires an overhauling of the methodology. The symptoms of change in violent actions have been noticed by the media as well.

The Eighth Report on Security in Trentino prompts reflection on the causes and the remedies. More accurate data and thorough objective analysis are necessary in order to provide effective short-, medium- and long-term responses.

This is an invitation extended to all those who for personal interest or professional commitment wish to examine and reflect upon the figures.