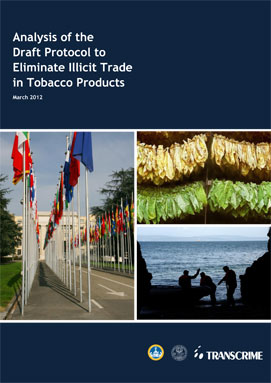 This report analyses the Draft Protocol to Eliminate Illicit Trade in Tobacco Products, currently under negotiation by the Intergovernmental Negotiating Body established by the Conference of the Parties to the World Health Organisation’s Framework Convention on Tobacco Control.

This study assesses the impact of the Draft Protocol on the illicit trade in tobacco products, identifying strong and weak points and possible improvements. This report also surveys the existing measures falling within the scope of the Draft Protocol in four countries in different continents (Canada, Italy, Singapore and South Africa), highlighting the differences and the incoherence among the surveyed countries.

The report is carried out by Transcrime, funded and supported by Philip Morris International (Switzerland).